Imagine a diet pill that tricks your body into thinking it has already eaten. And not just eaten, it even tricks your metabolism into burning fat because your system starts to believe that it has consumed a lot of calories already!

Such a weight loss product is no longer just science fiction. Researchers at Salk® have indeed tested a new drug called Fexaramine on mice (kinda sad 🙁 ), and the test results have been incredible. This miracle diet pill may be just the solution that we’ve been waiting for.

Initial tests on Fexaramine have shown that it produces the same physiological reactions in the mice’s intestines as those which occur after consuming a meal. The test mice also burned calories (which they did not consume) because their metabolism was ‘tricked’ into thinking they were already full!

In this article, learn everything there is to know about the Fexaramine diet pill and you be the judge. Is it the miraculous weight loss drug that we hope it is?

If I wanted to get super technical, I might tell you that the chemical composition of Fexaramine is  3-[3-[(Cyclohexylcarbonyl)-[[4′-(dimethylamino)-[1,1′-biphenyl]-4-yl]methyl]amino]phenyl]-2-propenoic acid methyl ester, which is represented by the chemical formula of C32H36N2O3.

But, since I don’t,  I will just say that Fexaramine is a pill  developed by researchers at the Salk® Institute for Biological Studies in the U.S. (which is also known for conducting research on several diseases including AIDS and Alzheimer’s) with the hopes of creating a diet pill like no other.

Whenever you overeat, or eat more food than your body naturally metabolizes, either you run a few miles to ramp up your metabolism, or your body has to do some spring cleaning in order to make room for it all. This is where Fexaramine comes in.

Fexaramine activates certain molecular and biological processes in the intestines (in technical jargon, it triggers the farnesoid X receptor (FXR) switch) which, in turn, stimulates the production of bile acids.

These are naturally occurring acids. Actually, they are the same ones that help us digest food every time we eat. Fexaramine thus works like a “meal in a pill” in that  it creates a ripple of effects in the body, tricking it into thinking that it has already consumed hundreds of calories.

Not only do you feel full and avoid consuming meaningless calories, your body also goes through the motions of burning those calories and the stored fat with them!

Unlike many other diet pills and weight loss supplements that offer promises of quick weight loss, Fexaramine doesn’t enter your blood stream.

Instead, it stays in the intestines where it continues to trigger those happy processes that we discussed, tricking the body into feeling full longer and burning more calories in the process. 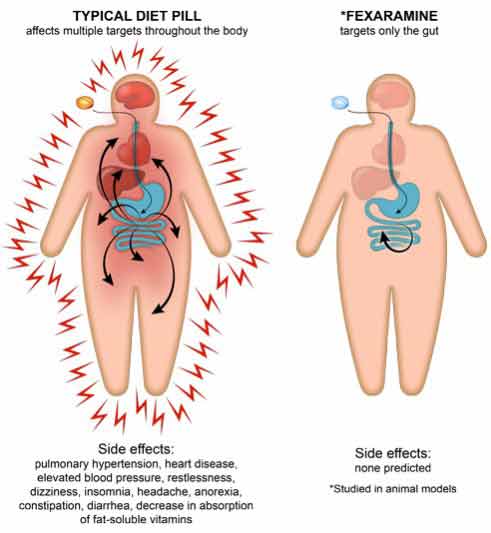 During the tests conducted on obese mice placed on a high fat diet, researchers fed the test subjects daily oral doses of Fexaramine for a period of five weeks. At the end of this test period, the mice had stopped gaining weight and their cholesterol and blood glucose levels were also lower.

The drug also led to the formation of Brown Fat Cells which help to burn energy rather than store it as fat. The control group – which also consisted of obese mice on a high fat diet – were not fed Fexaramine and did not show similar results, clearly indicating that it was the Fexaramine that was triggering the rapid calorie loss in the test mousies.

Here is a summary of benefits of Fexaramine weight loss drug as observed in mice:

The world is slowly but surely entering an exciting era of new possibilities and hope for those searching for effective weight loss products. For many people, trying to lose weight is like fighting a losing battle.

There are millions of Americans who are at risk of dying from obesity related diseases such as heart attack, hypertension or diabetes.

Ok, that’s a little serious for this blog so change that for: There are millions of ladies who really want that extra slice of cheesecake. This may one day be their salvation.

As it is not FDA approved, and there’s no literature on research on humans, if you find Fexaramine online (ya, they’re there), unless you have a chemistry lab in your garage and a Victoria’s Secret model to test it on, it’s really not worth the purchase.

We will let you know when Fexaramine is considered safe and on the market! Until then, sign up for Beauty Updates to stay in the loop!

Everything You Need to Know About:

This site may use cookies for analytics, advertising and to improve our site. By remaining on our site you agree to our possible use of cookies. Learn how to personalize your cookie settings here.

Everything You Need to Know About:

Menu
This site may use cookies for analytics to improve our site. By remaining on our site you agree to the possible use of cookies. You can learn more about your cookie settings here.